Outlook: Energies are mixed to start the morning session after a 6-day rally came to a halt yesterday. A reversal off the lows for the US dollar yesterday due to bearish US economic data put pressure on commodities. Profit-taking is likely spilling over into today as longs choose to cash in on their streak. Ultimately the narrative that has driven energies higher over the past two weeks has not changed. China is expected to see a strong uptick in travel through the end of the month and a contracting economy could persuade the Fed the pivot to a more dovish path. Russia has said their crude production has remained steady since sanctions have targeted oil, however, they will face another round of sanctions targeting refined products to kick off February. A heavy maintenance schedule for US refiners is also expected this spring with roughly 1.4 million bpd of refining capacity expected to be offline in spurts through May. EIA data is due to report this morning, which may show refinery turnarounds were pushed up and are already underway following weather-related shutdowns.

Weekly Continuous NG: Prompt natural gas continues to tumble and has fallen to its lowest level since June 2021. A slight shift towards a colder weather forecast has provided brief support, but the overall mild winter is dominating the trend. 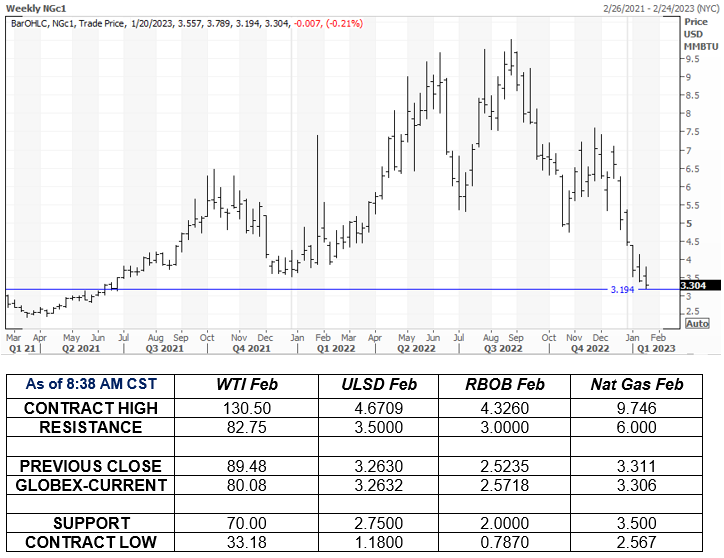